skip to main | skip to sidebar

Consider joinging an being part of the active and growing community across North America. We welcome Iceland Sheepdog owners from Canada, the United States and Europe. We welcome everyone interested in the Icelandic Sheepdog,

We have long term Worldwide an N.A. Breeders on the list to answer your questions.You do not need to be belong to any club nor pay a fee in order to be a member of our group, just a interest for the breed is all that is required.

We welcome Showing Owners an Breeders, who might want to talk about Planned Breedings, Look for Studs, want help in evaulating litters. We welcome folks wanting to learn about the breed, and or breeding the Icelandic Sheepdog.Anything to do with planning, breeding, whelping, raising or training your Icelandic Sheepdog Dog is welcome on the list.

Are you are looking for an Icelandic Sheepdog Puppy? This will be good group to consider joining to learn about the breed, member breeders are allowed to post planned, coming and available Icelandic Sheepdogs puppies on the list, we encourge photos!

Are you training in Rally, Obedance, Agility or Herding or any other dog sport! You do not need to be working at competitive level in order to enjoy the list.Althought this is mainly a list for Showing an Working Dogs, all related Iceland Sheepdog Brags or Questions are welcome.

Don't see your fellow Icelandic Sheepdog Friends on the list? Please let them know about this group, as we are looking forward to the continued growth of this wonderful active working breed of dog in the coming future


http://pets.groups.yahoo.com/group/ISDShowDogs/
Posted by Icelandic Sheepdog at 6:49 PM No comments:

for the most recent updates on the dogs and current puppies for sale and planned litters.
Posted by Icelandic Sheepdog at 10:36 AM No comments: 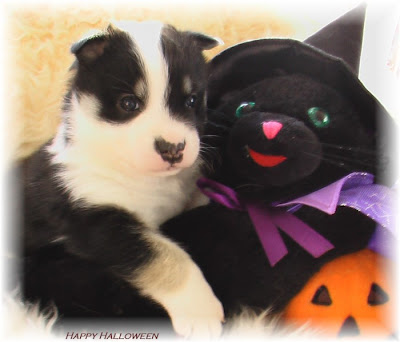 Posted by Icelandic Sheepdog at 3:36 PM No comments: Hello Folks, wow, almost a week old already, and Growing-Growing.. the puppies are doing wonderful.. what a colorful pretty litter, I just love these wonderful typical Icelandic Sheepdog white markings, as per the Breed Standard. These are going to be very flashy Adult Icelandics.

Have a great day from the waggy tailed Icelandic Sheepdog Gang.

New Barn Babies and updates on a this and that..plus Icelandic Sheepdog Puppies Wow, were has the time gone, first between storms-Snow Storms-Wind Storms-Freezing Rain Storms- Power has been off at least once and the drifts are so bad this year..

We have new lambs and new kids in the barn, all are doing well but keeping me very busy, my bottle lambs and kid are just about getting big enough to be weaned, so within a short time hopefully that will be one less chore to be done a number of times per day.
The new litter of bunnies are doing well and growing well but also require regular checks at this point as one of them got out of the box and its just way to cold to have this happen so we raised the height of the ledge that keeps them in the inside box. Its working well so far.
The puppies are amazing and when I am not doing chores inside and outside on the farm, I seem to be spending a great deal of time by the whelping box, and have started the neonatal stress tests for the puppies and they are doing great. Everyone will have doubled their birthweights by total, almost there last night on the daily puppy weigh -in.
I had to laugh at Jason last night because we were snuggling puppies on the bed, one each and Jason said, o my god look at how light it is behind this puppies ears, normally its a deep dark red starting at this age behind the ears, but as these are Chincilla factor puppies, they are in fact going to lighten as they grow up, and become a wonderful rich cream color (think heavy really cow's cream) and as they are our first Chincilla puppies, this was the first time Jason had seen this and he found it quite amazing. Blackmore's Tan is already coming in, she is showing her tri markings under her tail, on her legs, and one her face already, she still appears to be a long hair.
What pretty puppies they are, so flashy and I must admit to being thrilled to see just how even this litter is in all ways, I have a feeling they are going to turn out to be a litter to watch.
So Greenstone Fire an Ice really needed to get out and get some show training so we slipped off the farm for the ottawa kennel club show on March 16th, and I put a photo of Duchess with her Handler Linda in the show ring, she is just six months and this was her first show.
Greenstone Fire an Ice took Best of Breed, Best Puppy in Breed and Group 2nd..
Well, I had better get back to work, I will be taking new photos of the puppies on Thursday, and will post them then.
Have a great day from the Waggy Tailed Icelandic Sheepdog Gang
Icelandic Sheepdog Puppies for Sale - Three Females and One Male
For more information contact isdpuppies@hotmail.com
Posted by Icelandic Sheepdog at 8:15 AM No comments: 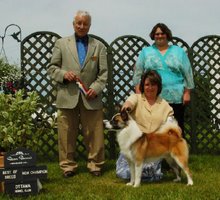 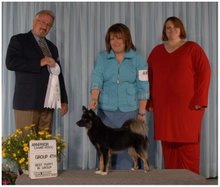 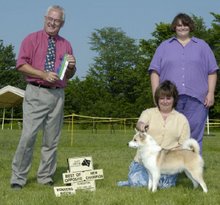 Two of our Greenstone Service/Therapy Dogs, A huge Thank you to their owners for all the hard work and love that goes into these boys. If you are interested in a Service Icelandic Sheepdog, I will work with you to find the right puppy for Therapy or Hearing.

First ISD to earn his AHBA HI and JHD Titles in North America. We use our adult icelandics on the farm with our own sheep and ducks, and we herding test our Icelandic Sheepdog Puppies on the ducks.

Icelandic Sheepdog
ottawa, Ontario, Canada
Hi Folks I am thrilled to share my home and farm with my Icelandic Sheepdogs (the National Breed of Iceland), my Ragdoll Cats, Hair Sheep, Rabbits, Hertage Chickens, Turkeys and Ducks. Our ISD help us with our Sheep twice daily on the farm, keeping their natural work ability is a important trait of the breed. We are striving forward on our farm to produce enough food in our gardens, and fields to provide for ourself and our four footed friends. We are the proud home of Multiple CKC Champions and our dog have been in the Top Five CKC Top Dogs in Breed since they moved over into Herding Group in 2006. Our Beautiful Icelandic Sheepdog puppies living across N.A. are first and formost loving family members but are also active in Conformation, Herding, obedance, Agiltiy, Disk Dog, Therapy, Tracking, Rally and we are honored to have a few that are also full time service dogs. This breed is NOT for everyone, but if they are good fit for your home and lifestyle, they will bring a smile to your face and make you laugh lots with their clever charms